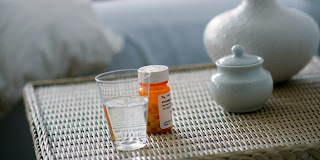 A new study has linked popular sleeping pills such as Ambien and Restoril with a nearly five-fold increased risk of early death.

Researchers at Scripps Health, a nonprofit health system in San Diego, estimate that in 2010, sleeping pill use may have contributed to up to 500,000 "excess deaths" in the United States. Heavy users aren't the only ones at risk—even people who took fewer than two pills monthly are three times more likely to die than non-users, researchers say.

"We were pretty startled by the findings," says Robert Langer, one of the authors of the study, which was published in BMJ, a British medical journal owned by the British Medical Association. "Since we started trying to qualify the results of this analysis about a year ago, I'll tell you, my prescription bottle for Ambien has sat on the shelf unopened."

Langer says the team's algorithm considered both users' and non-users' age, race, body mass index, and reported alcohol and tobacco use to determine if any other conditions were contributing to the mortality rates. The team also examined death rates in users and non-users who had a secondary condition, such as diabetes, hypertension, obesity, or asthma. No matter how the team sliced it, sleeping pill users had higher death rates.

"We thought maybe sleeping pills are being prescribed for sicker people, so we tried to take that out of the mix in several different ways," Langer says. "The risk was the same whichever way we looked at it. To me, that was the most startling finding. It blows things like high cholesterol or diabetes out of the water."

Sleeping pills are among the most widely prescribed medications in the United States—it's been estimated that as much as 10 percent of American adults use them at least occasionally. Some studies link sleeping pill use with higher cancer rates. Langer's team found that heavy users had about a 35 percent higher risk of developing a major cancer during the study, but that pales in comparison to the 450 percent increased mortality rate, Langer says.

Representatives from Sanofi, who makes Ambien, say the Scripps study is flawed.

"Sanofi believes the limitations of the analysis go further than what the authors indicate in the article and that the conclusions drawn based on the data presented are highly questionable," the company said in a statement. "Ambien has more than 17 years of real-world experience and is safe and effective when prescribed and taken according to its labeling."

Jack Cox, a spokesman for the company, added that trouble sleeping is often a symptom of other disorders. "People taking the medicine should discuss what's causing them not to sleep and address those issues," he says.

The Scripps team is exploring potential follow up studies that would examine causes of death. "We're starting to contact places about other populations we might look at," Langer says. "It's important to try and understand what the causes of death are."

Langer says sleeping pill users can wake up in a "hangover" state, where they are at a higher risk for falls or car accidents. Overdose and drug interaction-related deaths were also likely, Langer says.

The short half-life of Zolpidem (Ambien) and Temazepam (Restoril) means they leave a users' body within a couple hours, leading many to believe they are safer than longer-lasting drugs. Langer says his study shows that's not the case.
Posted by Liss at 6:25 PM