N. America’s West Coast to be most contaminated by Fukushima cesium of all regions in Pacific in 10 years — “An order-of-magnitude higher” than waters off Japan 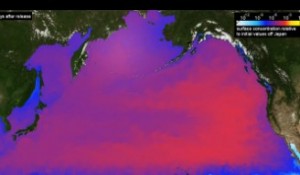 In the following years, the tracer cloud continuously expands laterally, with maximum concentrations in its central part heading east. While the northern portion is gradually invading the Bering Sea, the main tracer patch reaches the coastal waters of North America after 5–6 years, with maximum relative concentrations ( > 1 × 10−4) covering a broad swath of the eastern North Pacific between Vancouver Island and Baja California. Simultaneously some fraction of the southern rim of the tracer cloud becomes entrained in the North Equatorial Current (NEC), resulting in a westward extending wedge around 20°N that skirts the northern shores of the Hawaiian Archipelago. After 10 years the concentrations become nearly homogeneous over the whole Pacific, with higher values in the east, extending along the North American coast with a maximum (~1 × 10−4) off Baja California. The southern portion of the tracer cloud is carried westward by the NEC across the subtropical Pacific, leading to increasing concentrations in the Kuroshio regime again...
Posted by Liss at 1:32 PM