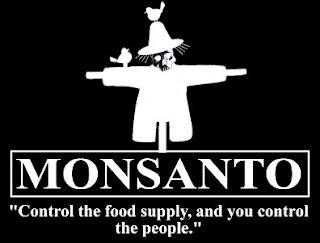 Millions of pounds of herbicides are applied to crops around the nation each year. In one single year, 2006, 96.7 million pounds of glyphosate was sprayed on soybeans alone; this is a 20-fold increase from the 4.9 million pounds in 1994, the year before Monsanto’s Roundup Ready seeds were introduced. Well now, biotechnology giant and creator pesticides and herbicides, Dow AgroSciences is bringing forth brand new GMO soybeans and GMO corn to the market that will ultimately cause more herbicides than ever to be sprayed across the nation. What’s more, the USDA is all over the idea.

And perhaps even more startling than the drastic increase in herbicide usage is the fact that Dow AgroSciences’ new genetically modified soy is actually specifically designed to resist an especially toxic herbicide known as 2,4-D, a toxic compound used in the well-known Vitetnam War defoliant Agent Orange. Known to kill or maim at least 400,000 and cause an additional 500,000 birth defects according to conservative Viatnamese estimates, Agent Orange is one of the deadliest concoctions on record.

As of now, biotech giant Monsanto still has a tight grasp on the corn and soybean market, with approximately 90 percent of soy and 70 percent of corn engineered to drown in Monsanto’s best-selling herbicide Roundup. However, it seems that their control over this market may soon dwindle at rapid speeds, as Roundup is creating a whole new category of superweeds that are resistant to Roundup and the active ingredient in Roundup - glyphosate. These resistant weeds were expected by experts to cover at least 120 million hectares worldwide by 2010.

The solution up until now has been to simply spray more Roundup, but now Dow AgroSciences has come up with a new ‘solution’. Dow is creating new corn and soybean super-corps that are not only resistant to Monsanto’s Roundup, but will also be able to withstand large amounts of the company’s aforementioned ‘agent orange’ herbicide, 2,4-D. This way, farmers will be able to apply both herbicides to their fields, with the super toxic 2,4-D killing what Roundup cannot.

That’s right, instead of turning to sustainable and environmentally-friendly farming practices to combat super ‘mutant’ bugs and mega-weeds, the biotech industry is making even stronger and more dangerous super herbicides and toxic recipes.

What Dow is very happy about (while disregarding public health) is that the USDA has shown interest in deregulating both products, with the most recent signaled approval being in early July for the GE soybeans. In fact, the USDA put out a key a document in the regulatory process for GMOs known as the Plant Pest Risk Assessment. Not surprisingly, the USDA’s assessment of Dow’s soy ended with “highly unlikely to pose a plant pest risk.”

So what will be the outcome of all of this? Millions of farmland acreage to be drenched in more herbicides by the millions of pounds. Unfortunately, the claim to safety for the new GE products don’t mean much, as both herbicides and GMOs are consistently shown to cause some form of damage, whether that damage be to the environment, human and animal health, or the biosphere as a whole. Dow’s 2,4-D herbicide, like glyphosate found in Monsanto’s Roundup, is already present in drinking water supplies, so individuals everywhere are already consuming the chemical. But now, exposure to this herbicide is more than likely to exponentially increase, only to cause more complications.
Posted by Liss at 12:08 AM