How Dr. Drew Sold His Cred to Big Pharma 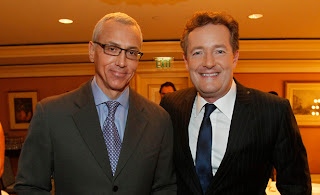 The health journalist for HLN comes under scrutiny after admitting he helped a major drug company promote antidepressants to consumers.

On Monday night, Dr. Drew Pinsky's program on HLN -- the network formerly known as CNN Headline News -- explored the everyman's dilemma of "how to tell if your doctor is hooked on drugs." Informative as the segment proved to be, one surefire signal your doc's hooked didn't come up. Any time federal prosecutors release a cache of documents proving that a pharmaceutical company paid your doctor $275,000 as part of a criminal plan to market its antidepressant for unapproved uses, your doctor has a drug problem. Dr. Pinsky is one of many physicians GlaxoSmithKline (formerly Glaxo Wellcome) sent around to trump up Wellbutrin's potential uses outside of FDA ground rules. His activities, elaborately decorated as a public educational campaign, amounted to a convenient contraption GSK used to launder illegal marketing messages.

"Dr. Drew" is a board-certified addiction specialist who rose to national prominence through his long-running radio show, Loveline, which delivers sexual health and relationship advice to its confused, vulnerable, and curious callers. MTV picked up the show, catapulting the telegenic Dr. Drew into true media stardom. He's built a wide-ranging career including shows like "Celebrity Rehab with Dr. Drew," and since last year he's hosted a nightly program for HLN. Dr. Drew's minor empire is built on audiences who've grown to trust his medical opinion.

Though GSK pled criminally guilty and will fork out $3 billion in penalties for violations ranging from illegal marketing to misreporting drug prices, Pinsky's role as GSK's enabler doesn't constitute a crime. But the extent to which he deceived his audiences as part of the GSK-prescribed program, which involved town halls, writings, and media appearances, ought to end his career with CNN. Aware that Wellbutrin's main competition, the class of drugs known as SSRIs, came with the unfortunate risk of lowering libido, GSK's sales department developed an ingenious plan to use Dr. Pinsky as the face of a public education campaign getting the word out about these side effects and "other effective antidepressants that do not disrupt sexual desire and function," as GSK's website said. Other antidepressants then available that didn't seem to depress sex drive included Serzone, which is now off the market, and Remeron. But both had other complicating factors that made Wellbutrin the better choice in such situations.

Dr. Drew hasn't apologized and has instead issued a statement saying his comments about Wellbutrin were based on his own clinical experience. That's the claim most doctors make when pressed about giving remarkably on-message pharma-sponsored talks. Whether or not you buy his claim that GSK's money made no difference to him, Dr. Drew's role was suspect in speaking to an audience that was both unwitting of his paid status and medically unsophisticated. Similar to the audience tuning in to him on HLN every night, he was speaking to people who were relying on his medical authority. Clinical audiences have a base of knowledge they can use to evaluate claims that Dr. Drew aired, such as his assertion on one radio program that Wellbutrin can make women multiorgasmic. The general public does not.

The other CNN host facing charges of public trust violation, Piers Morgan, has so far survived calls for his resignation over his alleged but unproven link to Britain's phone hacking scandal. Now CNN, mired in its lowest ratings in decades, faces a similar decision accompanied by fewer options. When I brought up the Piers Morgan affair in an interview, Turner Broadcasting spokesperson Carolyn Disbrow tried to distance HLN from CNN at large. "You know we're separate, right?," she said.

According to documents available on the Justice Department's website, Dr. Drew broadcast GSK's intended message while keeping audiences in the dark about being a paid spokesman. Pinsky has also admitted as much in a statement. Although Turner told me that Dr. Drew's GSK payments "occurred well before the time he became affiliated with [HLN]," Dr. Drew's habit of taking money from pharma doesn't appear to end there. ProPublica's "Dollars for Docs" database reports that Johnson & Johnson paid Dr. Drew $74,500 just two years ago. Was that more undercover messaging? Dr. Drew's brief statement doesn't address J&J or the most important questions: what else are we missing, and what's going on now?

While pondering Dr. Drew's next move in this scandal, I reached out to Dr. Daniel Carlat, a psychiatrist who once made big bucks giving talks for Wyeth about its antidepressant Effexor. Dr. Carlat went on to redeem himself by founding a pharma-free continuing medical education company, writing about his experience, and is now serving as director of the Pew Prescription Project, which aims at getting the Physician Payments Sunshine law implemented as quickly as possible. Calling Dr. Drew's actions improper, Carlat says "doctors would think twice about accepting such payments if a strong disclosure law were in effect." Recently, the Center for Medicare and Medicaid Services delayed its estimated Sunshine implementation date until January 2013. Though all physicians must make plans for 2013, back in 1999 Dr. Drew could never have predicted the confluence of events that brought his $275,000 deal into public view today.

Dr. Drew happens to sell ad spots on his Twitter account. He dutifully identifies his sponsored messages on Twitter, unlike the messages he delivered for GSK. He tries not to overdo it. "It's treacherous. I don't want people to think I'm exploiting my followers," Dr. Drew once told a CNN reporter. That's exactly what I'm thinking.
* * *
From Forbes:

A transcript of Dr. Drew’s appearance on a radio show

Other documents included in the DOJ’s complaint