Behavioral Disorders in Children from Cellphone Use During Pregnancy 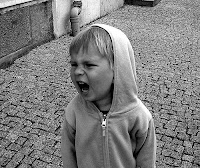 Moms-to-be might want to add a little distance between their unborn children and cell phones. The Yale School of Medicine released a study on the effect of radiofrequency radiation on fetal mice this week. Researchers concluded that it would be “sensible” for pregnant women to limit babies’ exposure to all wireless devices, as simply using the devices could help lead to behavioral disorders in children.

“This is the first experimental evidence that fetal exposure to radiofrequency radiation from cellular telephones does in fact affect adult behavior,” said Dr. Hugh S. Taylor, head author of the study.

For the experiment, Taylor and other researchers placed a silenced cell phone above the cage of pregnant mice for all 19 days of gestation. All rodents born in the exposed group faced a series of psychological and behavioral tests; the exposed mice were more hyperactive and had reduced memory capacity. Taylor believes the exposure affected the rodents’ development of neurons in the prefrontal cortex of the brain.

“The rise in behavioral disorders in human children may be in part due to fetal cellular telephone irradiation exposure,” Taylor concluded, though admitting more research was needed.

Differences in Mice and Men

Meanwhile, experts from the University College of London scorned the study as alarmist for comparing mice—smaller in size with a significantly shorter gestation period—to people.

The dose of radiation the unborn mice were exposed to was, in their view, disproportionate to the amount received by a human fetus due to size and brain development stage differences between the two species – essentially saying that behavioral disorders in children due cellphone radiation exposure simply isn’t an issue. One might note, however, that 9 months of gestation compared to 19 days might change the results, too.

The DailyMail received word from the Health Protection Agency, however, that the latter “constantly monitors and reviews this scientific research and will consider this study, along with other peer reviewed research, as part of that process.”

Keep in mind: two years ago, researchers from the University of California, Los Angeles, concluded in a study involving 29,000 children that behavioral disorders in children were more likely to occur due to cellphone exposure. In fact, those exposed to cell phones in utero were 30 percent more likely to have behavioral problems by age 7. Skeptical scientists claimed that other factors—such as the attentiveness of mothers obsessed with cell phone use—might have been at play.
Posted by Liss at 3:40 PM