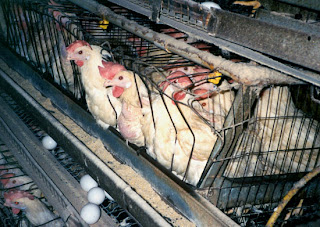 We shouldn’t need much more reason to avoid antibiotic-fed chicken than the abuse and neglect they suffer in cages and “free range” facilities. But in case anyone still has second thoughts, we can safely put them to rest now that conventionally-raised chickens have been linked to urinary tract infections in people. Eating the antibiotic-fed chicken can especially lead to a urinary tract infection in women.

Urinary Tract Infection in Women and Chickens in Slaughterhouses with E. Coli

A group of researchers—in the US, Canada, Europe, and Australia—have found genetic similarities between E. coli from slaughterhouse animals, especially chickens, and the bacteria causing a urinary tract infection in women.

“The strains of E. coli that they have been tracking [in slaughtered chickens and turkeys] happen to be the kind that leave the gut to create infections elsewhere in the body. Specifically they are the strains responsible for urinary tract infections, which in the US, occur up to eight million times per year.”

The researchers’ findings coincide with a recorded change of a urinary tract infection in women resistant to standard treatment in the past decade.

The Center for Disease Control and Prevention found the evidence so compelling as to report on 12 July, “ExPEC [Extraintestinal Pathogenic E. coli] transmission from food animals could be responsible for human infections, and chickens are the most probable reservoir.”

Meanwhile, the National Chicken Council—a pro-poultry industry lobby—retorts that chickens fed antibiotics are not the source of E. coli and that antibiotics in their feed has no effect on people who eat them. (The conflict of interest here hardly needs to be pointed out.)

According to the Food and Drug Administration, 80 percent of antibiotics sold in the US is administered to livestock, not people. (Ask the financially invested Animal Health Institute, though, and you’ll get a mere 28 percent.) Meanwhile, the FDA—bending to industrial pressure—has done “shockingly little” to combat the widespread and abused implementation of antibiotics in animal feed. Judge Theodore H. Katz ordered the FDA back in June to get its act together rather than ignore scientific evidence and citizen petitions. The future of antibiotics in livestock—and the effects on omnivorous humans—remains hazy.
Posted by Liss at 10:29 AM