Die-off of birds all over Alaska beaches, floating in Pacific — “They seem to be starving” — Deformed and abnormal animals reported 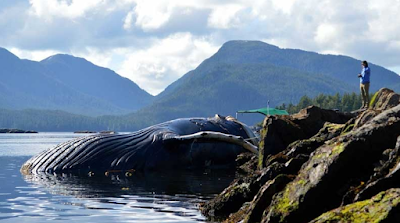 KBBI, Aug 4, 2015 (emphasis added): Bird Death Reports Are Up In Homer, Food Sources Possibly To Blame — The Alaska Maritime National Wildlife Refuge is receiving multiple reports indicating a significant increase in dead and dying birds found on beaches… Leslie Slater is the Gulf of Alaska Unit Biologist for the Alaska Maritime National Wildlife Refuge… says there are a lot of potential reasons for the increase in fatalities but the prevailing cause is likely tied to the birds’ food sources.

“What we’re seeing more precisely is that birds seem to be starving. That’s sort of the ultimate cause of their deaths but something might be happening before that… biotoxins can build up through the food chain and ultimately cause the deaths of these birds.”

These deaths don’t seem to be isolated to Homer’s beaches. There are reports of similar deaths down the Alaska Peninsula and the eastern edge of the Aleutians. Slater says it’s possible they could be related to dead whales found near Kodiak… She warns the public not to touch dead birds because they could be carrying disease.