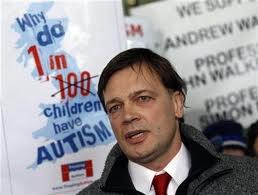 "We are absolutely delighted with this judgment, which vindicates Professor Walker-Smith. John Walker-Smith was one of the world's leading gastroenterologists. It was incomprehensible that he should have been threatened with being struck off in the first place. This judgment calls into question the independence and competence of the GMC, which was determined all along to pursue a witch-hunt against Professor Walker-Smith, Dr. Andrew Wakefield and Professor Simon Murch after they reported their research into the link between bowel disease and regressive autism." Throughout the hearings (the longest in GMC history) the GMC deliberately chose to cherry-pick the evidence to suit their prejudice against these doctors, who had always acted in the very best interests of the children they treated." – David Thrower, autism father

Dominant Social Theme: What? Huh? What gives? Ridiculous. These men set vaccines back by a century!

Free-Market Analysis: Wow. The first reversal. You can see the report in the video below. What a big one it is. Andrew Wakefield himself, the most reviled medical man of the 21st century, is well on his way to being vindicated now, from what we can tell.

This is surely a big story (though please note the media is not treating it as one). And the import is increased because Big Pharma has literally leveled all its guns at Wakefield in an attempt to discredit his claim that some kinds of vaccines might be involved in the development of autism.

If you examine the unfolding saga, you will be provided not just with tempestuous slander of Wakefield, but a timeline of the Internet Reformation itself.

We are fond of writing that the Internet is a process not an episode, and that the power elite that evidently and obviously wants to run the world (formally as opposed to informally) still has no idea how to deal with its revelations.

What happens is that the top elites – those that control central banking and use the proceeds to nurture world government – continually utilize the tools of control that worked in the 20th century but not the 21st. The fabulously wealthy old men seem to have no idea what to do. Or so we surmise.

In the case of Wakefield, everything was seemingly done correctly. The doctor was pilloried in 10,000 news stories; his research was discredited; he was labeled a cheat and a fraud; his livelihood was reduced; he was chased out of his home country of Britain; eventually he was disbarred and forbidden to practice medicine.

That should have been the end of it. But not now. Not in the 21st century. Thanks to the Internet, the ruckus has only continued to grow. Watch the video (below) to see what we mean. Dr. Wakefield's staunch cadre of mothers of children with autism believe in him more than ever. And there are plenty of sympathetic articles to go around now. A growing number.

Wakefield continues to fight back. He is suing one of his detractors and even the paid hacks that jump to pillory him at every opportunity now sound abashed. Maybe they too are experiencing the rough realities of the 21st century. It's not so easy to be a thug these days.

You see ... the Internet is a process not an episode. Like the Gutenberg Press before it, the Internet is making many of the elite's dominant social themes – fear based promotions – unworkable. As a result the top elites are turning increasingly to age-old tools of control: war, depression and brute state-mandated force.

But it doesn't help when the truth can be broadcast regularly. And thanks to the Internet it can be. Dr. Wakefield can certainly be disposed of. He can have an "accident." But his truth is not so easily silenced as it might have been even a decade ago.

Even a few months ago, those that wish to continue mass vaccination despite growing evidence that such programs are in some cases very possibly ineffective (and now and then even deadly), might have been forgiven for believing the worst was behind them. No such thing

Earlier this week, a British High Court judge threw out the verdict of professional misconduct against Professor Walker-Smith. This is the man who along with "rogue vaccine Doc" Andrew Wakefield handled tests for a Journal-published paper suggesting that the MMR vaccine might generate the condition of autism. Here's an excerpt from a UK Telegraph article on the subject:

Both Dr Andrew Wakefield and Professor Walker-Smith were found guilty of professional misconduct over the way the research was conducted and were struck off the medical register in May 2010. The GMC panel's verdict followed 217 days of deliberation, making it the longest disciplinary case in the GMC's 152-year history. In 2004, the Lancet announced a partial retraction, and 10 of the 13 authors disowned it. But Mr Justice Mitting ruled the decision against Professor Walker-Smith "cannot stand", and quashed the findings.

This is surely a quasi-mortal day for Big Pharma. Its campaign against Wakefield is in shreds. The truth is coming out – the REAL truth about vaccines. The truth that vaccines may be a kind of "directed history." Whoops.

The truth apparently (see other article this issue) is that NO credible evidence exists that even proves vaccines perform as CLAIMED. The vaunted double-blind tests do not exist. The statistics were fudged. Polio – supposedly alleviated – was confused (on purpose?) with numerous other diseases that still take their toll today. The beneficiary: Big Pharma, of course, and the elites that control the top companies.

THIS is no doubt the REAL secret that Big Pharma has been desperate to hide. It explains the almost inexplicable rage against Wakefield. They've used nuclear weapons on a gnat. Why? They feared the gnat's bite would lead to blood poisoning of the entire, rotten corpus.

And so it begins. Like a crime that gradually unravels even though the perpetrators are desperate to stop the unraveling and will do everything in their power to retard it. Too late...

Serial damage control – the kind that the elites were so good at practicing in the 20th century – means nothing in the 21st. "No man, no problem," Stalin famously said. But he lived then, not now.

And the Internet is a process not an episode.
Posted by Liss at 4:16 PM