No treatment for smokers or the obese: Doctors back measures to deny procedures for those with unhealthier lifestyles 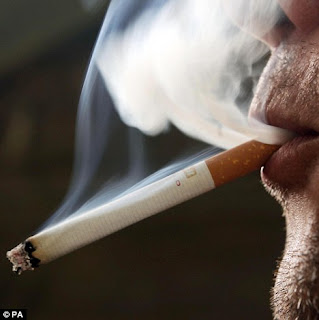 More than half of doctors across the UK have backed controversial measures to withhold treatment to smokers and the obese.

According to a new survey around 54 per cent of those who took part said the NHS should have the right to deny non-emergency treatments to those who fail to lose weight or kick their smoking habits.

Members of the networking website doctors.net.uk were asked 'Should the NHS be allowed to refuse non-emergency treatments to patients unless they lose weight or stop smoking?' And although the poll was optional 593 of the 1,096 doctors who participated answered yes.

It is believed that some procedures are less likely to work on those with unhealthier lifestyles and medics say they should not use their already limited resources for such work.

In some parts of England smokers and the obese are already being rejected IVF treatment as well as hip and knee replacements by private clinics but patient groups have reacted angrily to calls for the NHS to follow suit, saying it denies them their basic human rights.

Speaking to The Observer Dr. Tim Ringrose, doctors.net.uk's chief executive, said the shift in attitudes is a result of the need to make huge cut backs.

He said: 'This might appear to be only a slim majority of doctors in favor of limiting treatment to some patients who fail to look after themselves, but it represents a tectonic shift for a profession that has always sought to provide free healthcare from the cradle to the grave.'

Dr. Clare Gerada, chair of the Royal College of General Practitioners, also told the paper: 'Clearly, giving up smoking is a good thing, but blackmailing people by telling them that they have to give up isn't what doctors should be doing.'

Pulse magazine has already reported that around 25 of 91 Primary Care Trusts in England have imposed some treatment bans since April last year.

But treatment bans of any kind were slammed by Dr Mark Porter, chairman of the British Medical Association's consultants committee, who added: 'There are occasions where a doctor may advise an obese person to lose weight before surgery can safely go ahead.

'But treatment bans are wholly unacceptable.'
Posted by Liss at 7:41 PM