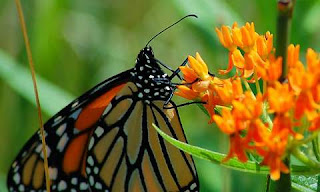 A 2011 study published in the journal Insect Conservation and Diversity found that increasing acreage of genetically modified Roundup Ready corn and soybeans is heavily contributing to the decline in monarch butterfly populations within North America. Milkweed, a plant butterflies rely on for habitat and food, is being destroyed by the heavy use of glyphosate-based pesticides and Roundup Ready crops. Over the past 17 years, the monarch butterfly population in central Mexico has declined, reaching an all-time low in 2009-2010.

“This milkweed has disappeared from at least 100 million acres of these row crops,” said Dr. Taylor, an insect ecologist at the University of Kansas and director of the research and conservation program Monarch Watch. “Your milkweed is virtually gone…this [glyphosate use on RR crops] is the one main factor that has happened…you look at parts of the Midwest where there is a tremendous use of these crops and you see monarch populations dropping. It’s hard to deny the conclusion.”

According to the Department of Agriculture, in 2011 94 percent of soybeans and 72 percent of corn grown in the United States were herbicide-tolerant. Due to this increase, the amount of Roundup used on crops in 2007 was 5 times higher than in 1997, only one year after Roundup Ready crops were available.

Another study published int he journal Crop Protection and conducted by Robert G Hartzler, an agronomist at Iowa State, found that milkweed on farms in Iowa declined 90 percent from 1999 to 2009. Additionally, his study found milkweed only on 8 percent of corn and soybean fields surveyed in 2009, which is 51 percent lower than in 1999.

Although the butterfly population may be suffering, humans are taking heat from Monsanto’s creations as well. Past research has shown that Monsanto’s Roundup ready crops are leading to mental illness and obesity, primarily by destroying the amount of good bacteria found in the gut. The corporation’s Roundup, containing glyphosate, has also been shown to cause infertility and birth defects.

Glyphosate is so present today that it has been found to be polluting the world’s drinking water through the widespread contamination of aquifers, wells, and springs. What may be most shocking is that very high concentrations of glyphosate have been found in 100 percent of urine samples tested in a recent study.

Related stories:  MILD WINTERS ARE DETRIMENTAL TO BUTTERFLIES [pure cornfed propaganda to take Monsanto off our minds...Ed.]
Posted by Liss at 4:39 PM