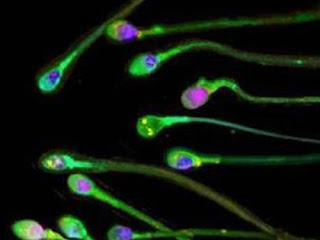 The Independent
by JEREMY LAURANCE


The reproductive health of the average male is in sharp decline, the world's largest study of the quality and concentration of sperm has found.

Between 1989 and 2005, average sperm counts fell by a third in the study of 26,000 men, increasing their risk of infertility. The amount of healthy sperm was also reduced, by a similar proportion.

The findings confirm research over the past 20 years that has shown sperm counts declining in many countries across the world. Reasons ranging from tight underwear to toxins in the environment have been advanced to explain the fall, but still no definitive cause has been found.

The decline occurred progressively hroughout the 17-year period, suggesting that it could be continuing.

The latest research was conducted in France but British experts say it has global implications. The scientists said the results constituted a "serious public health warning" and that the link with the environment "particularly needs to be determined".

The worldwide fall in sperm counts has been accompanied by a rise in testicular cancer – rates have doubled in the last 30 years – and in other male sexual disorders such as undescended testes, which are indicative of a "worrying pattern", scientists say.

There is an urgent need to establish the causes so measures can be taken to prevent further damage, they add.

Richard Sharpe, professor of reproductive health at the University of Edinburgh and an international expert on toxins in the environment, said the study was "hugely impressive" and answered sceptics who doubted whether the global decline was real.

"Now, there can be little doubt that it is real, so it is a time for action. Something in our modern lifestyle, diet or environment is causing this and it is getting progressively worse. We still do not know which are the most important factors but the most likely are … a high-fat diet and environmental chemical exposures."

Researchers from the Institut de Veille Sanitaire, St Maurice, used data from 126 fertility clinics in France which had collected semen samples from the male partners of women with blocked or missing fallopian tubes. The men, whose average age was 35, did not have fertility problems of their own and were therefore considered representative of the general male population.

The results, reported in the journal Human Reproduction, showed the concentration of sperm per millilitre of semen declined progressively by 1.9 per cent a year throughout the 17 years – from 73.6 million sperm per millilitre in 1989 to 49.9 million/ml in 2005. The proportion of normally formed sperm also decreased by 33.4 per cent over the same period.

Although the average sperm count of the men was well above the threshold definition of male infertility – which is 15 million/ml – it was below the World Health Organisation threshold of 55 million/ml which is thought to lengthen the time to conceive. Other European studies have shown that one in five young men has a sperm count low enough to cause problems conceiving.

Combined with other social trends, such as delayed childbearing which reduces female fertility, the decline in sperm counts could signal a crisis for couples hoping for a family.

Sperm count: How to boost it

1. Wear loose underwear – to make healthy sperm the testicles need to be below body temperature.

4. Reduce exposure to industrial chemicals such as those used in making plastics – they can mimic the female hormone oestrogen countering male hormones.

5. Protect women in pregnancy – there is growing evidence that falling sperm counts may stem from effects in the womb.

6. Avoid anti-depressants – in rare cases they can cut sperm counts.
Posted by Liss at 4:27 PM